Bribie Island U3A started in a small way in 1992. It was initiated by Betty and Arnold Montaut who moved from Perth to Bribie. Initial classes were held in a room in the local Neighbourhood Centre. In the first year there were just 32 students and 7 subjects. It grew rapidly and had soon outgrown its premises. In 1997 Arnold Montaut won a Premier’s award for Community Services. By 2000 there were over 300 students and 30 classes.

In 2000 U3A moved to a house on South Esplanade. Most classes were conducted there, with a few held at tutors’ homes. Negotiations with Council led to use of the large Recreation Hall. Council built four air conditioned classrooms, a computer room and an office. Since 2005 this has been home, with exclusive use of the space.

In 2015 a major extension of classrooms and office space was built. The extension was opened in 2016. The Recreation Hall is also used for special classes, performances and events. Bribie Island U3A celebrated its 25 year anniversary in 2017. 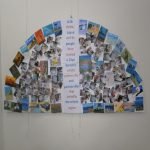 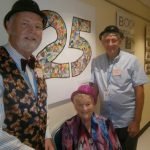 Bribie Island U3A celebrated 25 remarkable years of growth and achievement in September 2017, with displays and performances by most of the 130 classes “Learning for Fun’ at our U3A.

At weekend dinner and lunch functions, displays and demonstrations were presented on video screens and live on stage. These showcased some of the classes that are conducted. For many students it was their first opportunity to see and experience the amazing things that other people are doing at our U3A.

In all the classrooms of the recently extended U3A Centre, informative and colourful displays showcased various arts and crafts, language and words, games and hobbies, music and dance, history and culture, photography and cinema and a variety of fascinating information.

Live stage performances by guitarists and ukulele players entertained the diners, together with the screening of amusing video recordings of U3A dancers, musicians, sports and games recorded at classes, with the theme of “25” as inspiration. The events concluded with an entertaining play written especially for the anniversary and performed by the accomplished class of U3A Theatre Players.

President Greg Sibthorpe and his committee were delighted with the result, realising that all the hard work done by so many people over many months, had created a lasting record of valuable information for future use and communication. Many of the displays and video recordings went on show for viewing by the public during the Term 4 Enrolment Day.

It has been a remarkable journey of growth and success since Bribie U3A began in 1992 with less than 30 students and just 5 classes held at the Neighbourhood centre. It is almost impossible to imagine what U3A could become in just a few years from now, as more and more people retire to live on this island paradise, and bring their interests and life experiences to share with current and future generations.

The Recreation Hall as our U3A Centre

We are so very fortunate to have such a great venue for most of our U3A activities. Most other U3A operations throughout Australia have to conduct their classes in a variety of different rented venues, spread throughout their community. On the occasion of the 25th Anniversary year of Bribie U3A I thought it would be appropriate to reflect on the place we call our home.

Although it has only been home to U3A since 2005, the fascinating history of the Recreation Hall goes back almost 60 years to a time when Bribie Island was much less populated, and residents made great personal efforts to improve the social and sporting facilities we enjoy so much today. Back in 1961, before the Bribie Island Bridge was constructed, the island was a very different place with a permanent population of less than 500 people. Thousands of tourists and visitors had been coming to Bribie for weekends and holidays to enjoy the fishing, boating and wildlife since 1912, and the small resident population struggled to service these fluctuating requirements and seasonal demands.

However, a number of concerned residents were keen to provide suitable recreation and entertainment facilities for their children and youth of the island. A local real estate agent, Jack Honey, had been a keen boxing enthusiast, being runner-up in an Australian Championship before retiring. He was the driving force, together with Tony Loi and Allan (Stumpy) Cunnington, for the creation of formal sporting activities on Bribie when plans were formulated for a Gymnastics and Boxing Club in 1961. It initially conducted its activities in the Church of England Hall in Banya Street, the largest building on Bribie at that time, but soon moved to the newly built “Hendon Hall” in 1962.Hendon Hall has had many uses in its 55 year history, and is now a Baptist Church in Cotterill Avenue.

The newly formed Gymnastics and Boxing Club decided, in 1963, that it would combine the interests of all outdoor sporting groups on the island and create the “Bribie Island Sports Club”. Two local Policemen Jack Williams and Brian Pickup became very involved with this new combined group and made approaches to the State Lands Department regarding land for the purposes of a recreation area. Initially, some consideration was given to a possible parcel of land in Toorbul Street, but subsequent discussions led to the promise of land near the old “Town Dump” on the south side of Ocean Beach Rd (now First Avenue) where the Recreation Hall now stands.

In March 1964 the Sports Club changed its name to the Bribie Island Sports Association and a constitution was drawn up. Membership fee was set at one pound, ladies fees were ten shillings and children under 16 could become honorary members. The present building known as the Bribie Island Recreation Association Hall was constructed over a period of many years from 1966. Initially, insufficient funds would only allow the building of two side walls and a rear wall. It was finally completed and enclosed in 1979 and a “Grand Ball” was held for its opening, which was attended by virtually every Bribie resident. Over the subsequent years it has seen many different specialty Groups and Clubs use the facility, and many large functions, events and celebrations have been held in the Hall.

In 2005 part of the Recreation Hall was specifically transformed to provide a purpose-built classrooms and an office for Bribie Island U3A, and an adjoining area for the Vietnam Vets.

As U3A student numbers and classes grew over the next 10 years, a major extension project was initiated in 2015, in conjunction with the Council, to accommodate more than 1300 students and 130 classes conducted each week by U3A volunteers. This extension on the north end of the existing facilities towards the car park, more than doubled the area of the U3A Centre, providing automatic and energy efficient lighting and air conditioning, together with a modern upgrade of the public kitchen area and security.

The University of the Third Age (U3A) worldwide

The first University of the Third Age was established by the government in 1972 at Toulouse in France, to improve the quality of life for older people by giving them access, at moderate fees, to non-credit courses in the humanities and natural sciences at established degree granting universities. Professors and tutors were required to allocate some of their time to this cause.

The term “Third Age” denotes the age of retirement, following the first age of childhood and schooling, and the second age of vocational employment. The idea spread rapidly in France and then to other countries of continental Europe. An International Association of Universities of the Third Age (IAU3A) was established in 1975. In 1981 the idea was introduced to Britain by a group based at the University of Cambridge. As Britain had, since early in the century, provided adult education at a moderate fee in conjunction with the Workers’ Educational Association, the Cambridge group adopted the idea of a self-help university. This developed as a form of intellectual democracy, in which there would be no distinction between teachers and taught. All members would be encouraged to participate, either by teaching, learning or assisting with planning and administration. This self-help approach reduces the need for dependence on outside resources. In this environment learning for fun is an end in itself. Individuals choose subjects they like from the courses offered. No entry qualifications are required, no examinations are set and no awards are given.

The first U3A in Australia was established in Melbourne in 1984 and since then campuses have been established in all states and territories, and the movement has spread to New Zealand. There are now more than 100 U3As in all states of Australia, and a U3A Online version has been developed for people in remote locations or with limited access. The offerings of each U3A vary considerably depending on numbers and location. Courses are held mainly in the daytime and, where possible, in community centres, libraries and many other public buildings at little or no rent. Courses vary in length from one or two terms to a full year. Single lectures and one-day courses are also held. Field excursions, over several days are sometimes arranged, and even overseas tours, based on literature, languages and history are occasionally offered. The volunteer tutors and courses leaders are generally retired with professional skills, or people who have had a lifelong hobby. Many are retired teachers from schools or tertiary institutions.

Administrative work is done by volunteers. The work includes receiving enquiries, enrolling members, arranging publicity for courses to be offered, and finding venues for the courses. Newsletters are published several times a year and members apply to enrol in a course. Membership and class fees vary considerably according to the circumstance and facilities of individual U3As throughout Australia and worldwide.